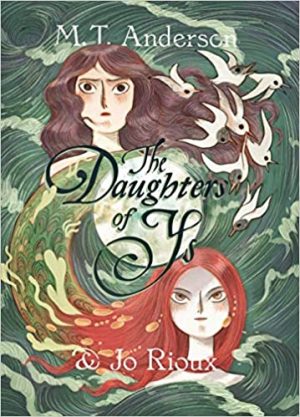 The Daughters of Ys written by M.T. Anderson, art by Jo Rioux. First Second, 2020. 9781626728783. 205pp including a list of three versions of the ancient Breton folktale referenced to write this modern version.

The wounded Gradlon, King of Kerne, is saved by a magical woman from another world, Lady Malgven. She promises if he helps her kill her wizard husband, his lands will belong to Gradlon. So Gradlon makes her his queen and she uses her powers to push back the sea and build him a beautiful capital city, Ys. Then she dies, leaving behind two daughters.

Rozenn loves wild places, like the forest. Dahut loves magic. But the magic seems to have cost their mother something, if not her very life. And their mom used to control the sea monster. Who’s going to control it now that she’s gone? Dahut, that’s who. The girls grow apart and become very different. At the heart of who Dahut has become is the terrible secret to both her magical powers and the city’s survival.

This isn’t a children’s graphic novel, though it might look like one. It’s a dark story that teens and adults will enjoy, beautifully rendered in a style that has all the depth of the best myths and folktales. It’s not graphic but it does have some sex (though not much nudity) and more than a little blood. And it’s is simply one of the most beautiful and well structured graphic novels I’ve seen in a while. 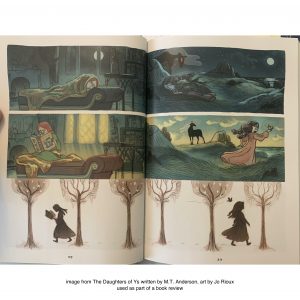