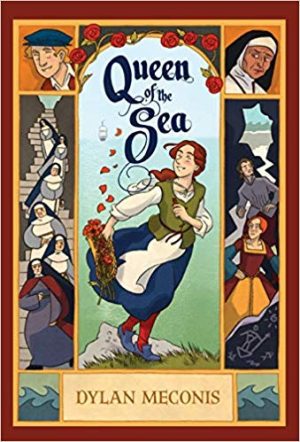 Young Margaret lives on a small island in the Silver Sea, in a convent that belongs to the Elysian Order. She’s not sure where she was born, why she came to the island, or who her parents are, but she’s reassured by the nuns that she was sent there to be safe. Envious of kids who have parents, she bonds with the only “children” on the island: the wooden statue of the Sorrowful Child, and Eleanor, who is in a painting with her father, King Edmund. Margaret’s prayers are answered when the supply ship brings William and his overprotective mother, Lady Cameron. They’ve been exiled to the island after William’s father rebelled against the king. Margaret and William become close, and, years later, when he finally decides to leave the island, he’s the one that gets her to see that everyone there, including her, is a prisoner and cannot leave. Soon after a new exile arrives, and it is Eleanor (from the painting), along with guards and a very strict, high ranking nun. Eleanor is a bit angry (in part because she’s been exiled by her sister, who seized the throne), but Margaret is desperate to become friends, and soon finds herself drawn into helping Eleanor.

This book is based on events in the British Isles in the 16th Century. I cannot imagine being excited about a book that meets that description if it were written/drawn by anyone else, but I’ve been a fan of Meconis’ comics since reading Family Man years ago, and the characters, the writing, and art all drew me in. I found myself rooting for Margaret, and also fascinated by the details of convent life, from the coracle they used for fishing to the hours of the day to the hand signs they communicated with while eating silently.

This is a graphic novel that’s going to fit very well into all library collections. 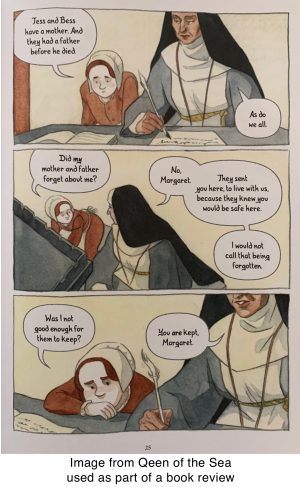 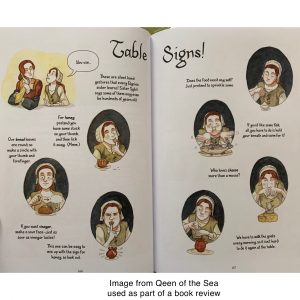