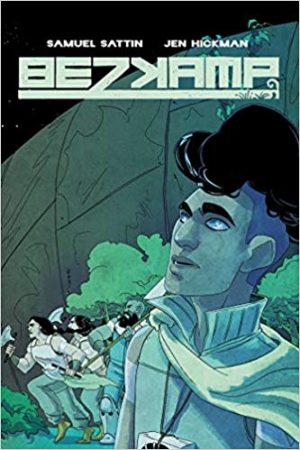 In one of the narratives of this graphic novel, a teenage girl, Janny, survives with the help/companionship of a small, winged alien. Giant, fanged and thorny creatures abound, and she soothes some of them with music.

On another part of the alien planet, near the village of Bezkamp, Nem collects forbidden technological artifacts. The land and its people are threatened by corruption, a kind of poison or sickness which is dealt with by Nem’s father and aunts, warriors who also keep the village safe from the monsters beyond their borders. Nem is no warrior, and after his father blames him for another’s death, things heat up between them. Nem lacks rage and fire, doesn’t follow the rules of Bezkamp, and doesn’t want to be a warrior. After his father finds Nem’s collection of artifacts, he takes Nem out beyond Bezkamp’s borders to test him. Nem will become a warrior or die trying.

It’s out there, after things go wrong, that Nem meets Janny. Together they discover the history of Bezkamp, and perhaps a way for it to thrive long-term.

Most of the characters speak in a strange English vernacular that I struggled with at times, though it adds to the story when Bezkamp’s past is made clear. I couldn’t resist the illustrations, particularly the way the wild areas are colored — they feel joyously alien.