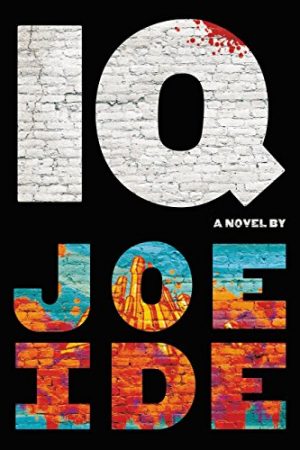 IQ is the nickname of Isaiah Quintabe, a brilliant young man from a poor Los Angeles suburb who was raised by his elder brother. Isaiah helps people out, solving small mysteries, often for free, and generally trying to do the right thing. But now he needs cash, and his former roommate, Dodson, has brought him a plum job: someone tried to kill rapper Black the Knife, aka Calvin Wright. If they can solve the crime (Dodson insists they’re partners), they’ll share a $50,000 bonus.

Chapters alternate past with present, showing the story of IQ’s relationship with the irritating and amusing Dodson as he tries to solve the crime. IQ once used his intellect to help them commit amazing robberies, back when he was first trying to figure out how to survive without his brother, and that has had a huge impact on his priorities.

Ide’s magic is that, by the end, you get that in some way IQ and Dodson need each other. Plus you’ll root for IQ more and more as you learn of IQ’s past and how he’s trying to make up for it. And at one point Ide short circuits what would usually be a long, twisting and turning part of the mystery in favor of characterization. Great writing.

J.B. at Seattle’s BLMF books put this into my hands saying it was the perfect hip hop novel, and it really was. Both the language and the story have great flow. The whole thing is worth reading for the opening chapter alone, though you won’t be able to put it down at that point. I’m heading out right now to buy the second book in the series, Righteous. The 5th book, Smoke, comes out in early 2021.