Aisha and her fiancé Tom move into a cheap apartment with his mom and daughter, Kris. His mother is manipulative and seems more than a little racist toward Aisha, who is a muslim. But Aisha defends Tom’s mom and wants to give her a chance. The building was the site of a bombing / murder and it still hasn’t been repaired. Aisha is having terrifying visions that are clearly more than that, with terrible results. Then others start to see things, too.

The opening pages are scary and geek friendly. I won’t spoil the former, but I will say there’s a SARLACC pit bundt cake that looks terrific. Campbell’s art has a spooky vibe that’s exacerbated by Villarubia’s colors, especially when the creatures appear. Great book. Terrifying. 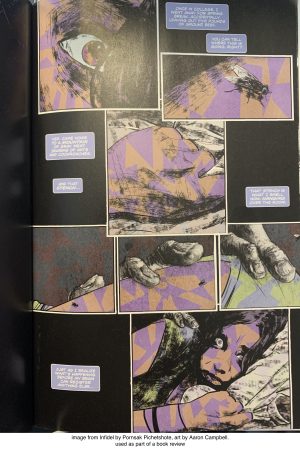