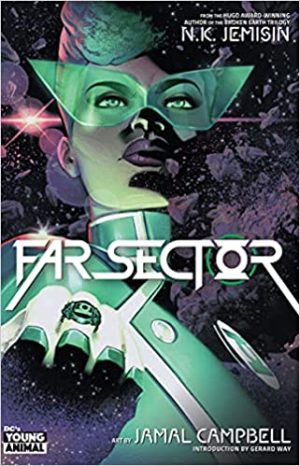 This is a long, complicated science fiction mystery, a graphic novel made up of 12 issues of a comics mini-series of the same name. If you like Jemisin’s novels, especially her character development and world building, read it. It’s fantastic. If you’ve seen Campbell’s amazing work on the DC title Naomi, I’m surprised to be able to tell you this is even better. And if like me you’re a Green Lantern fan from way back waiting for a great story, this is it.

It all takes place far, far from Earth, outside the sectors of space patrolled by the Green Lantern Corps on a habitat called The City Enduring. The ruling Trilogy Council, made of representatives from the three humanoid races that live there together, requested a Green Lantern to help them with an expected epidemic of violence. (It used to be a violent civilization until everyone’s emotions were removed.) The book opens with the City’s first murder in 500 years, and human Green Lantern Soujourner Mullein (ex-soldier, ex-cop) trying to investigate. Soon there’s a second murder, protests, and more violence. There’s a drug at the center of it all that lets citizens switch off their emotions, but that’s just part of the problem. Mullein bring a bit of snark, some four-letter words, and just enough anger and loneliness to her role as visiting barbarian investigator that she crosses the line in the best ways, and had me rooting for her throughout. (It’s worth noting her costume design totally kicks ass too, as does the way the City Enduring and its inhabitants look.) 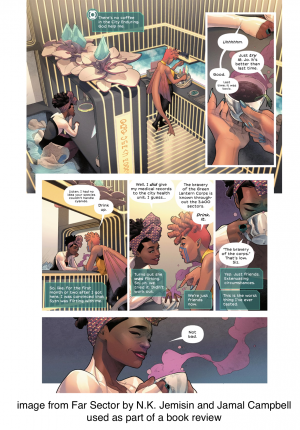