Aster and the Accidental Magic by Thom Pico and Karensac

Aster and her family just moved to the country. Her older brother gets their online game working, but then has to leave for a few weeks in the city. As he departs he warns Aster about monsters. The news is full of stories about emergency measures during the crow migration, which Aster’s mother is hoping to help with her Robo-Bird project. (They’re not normal crows, and humans have messed up their reproductive cycle, causing them to become violent and destructive.)

Forced to go outside and explore by her dad, Aster meets a granny with woolly dogs, one of the old shepherds who protect the mountain. Aster gets one of the woolly dogs for a pet, names him Buzz, and their  adventures together begin. In the first, they meet a trickster god who grants wishes. (All does not go well of course, but it’s pretty funny.) Monsters make an appearance as well as the crows. That’s just the first half of the book. The second half involves a magical fox and the seasons, and of course the granny and her dogs.

This book reminds of both Adventure Time and Luke Pearson’s Hilda graphic novels, though it’s very much its own thing. Recommended for kids and comic lovers everywhere. 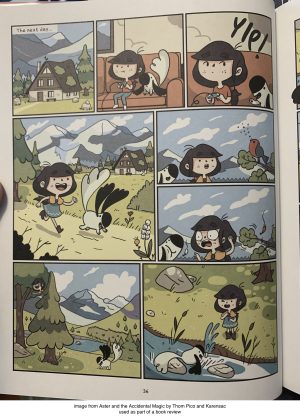